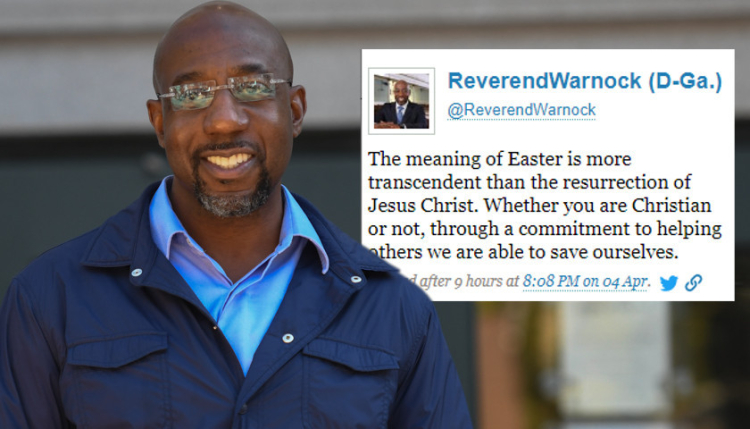 People like this make me sick... He takes the name "reverend" and pretends to be a Christian and yet he not only promotes racism and secular values, but Easter 2021 he has the audacity to betray Christ holistically in one Twitter post. (If you do not see the problem here (relativism/pluralism and self-righteousness) then you are part of the problem. (Confront me with this if you do not like it)

"Cheap grace means grace sold on the market like cheapjacks' wares. Grace is represented as the Church's inexhaustible treasury, from which she showers blessings with generous hands, without asking questions or fixing limits. Grace without price; grace without cost. The essence of grace, we suppose, is that the account has been paid in advance; and, because it has been paid, everything can be had for nothing. Since the cost was infinite, the possibilities of using and spending it are infinite. What would grace be if it were not cheap?  Cheap grace is the preaching of forgiveness without requiring repentance, baptism without church discipline. Communion without confession. Cheap grace is grace without discipleship, grace without the cross, grace without Jesus Christ, living and incarnate. Cheap grace is the deadly enemy of our church.

Cost of Discipleship by Dietrich Bonhoeffer (1937)

Do you seek "cheap" or "costly" grace?

I have already hit on several of these points at a high-level but to look at some of these practically and specifically let's first look at the concept of "costly" vs "cheap" grace and why the vast majority of churches today openly endorse the definition of cheap-grace outlined above. Christians spend way too much time today (especially in the West) trying to figure out the minimum they can do just to get by; get by at work, school and faith. Here are just 10 practical examples of how we have looked at a certain concept and rolled with a little more holistic approach you might say. Instead of trying to find out the "least" we must do, why not want to do the most? See the 10 bullets below and then more details for each bullet below. Some of these are more theological in nature and some more all-encompassing; and again this is just 10 random things I feel has been personally and communally lost and in need of rediscovering (for lack of a better word). If I am wrong then please let's discuss where your points may be more on par than mine; I am not trying to force these on anyone nor even justify them, but just sharing is all:

1) Didache Mentality: Again not mandatory but desperately needed as society has proven we're not ready for anything.

2) Sabbath: I have come to the conclusion that we do not have to keep the Sabbath, but that we should.

3) Baptism: I have come to the conclusion that baptism and repentance are not optional for the Christian.

4) Communion: I have come to the conclusion that though not mandatory, Eucharist should be celebrated at least weekly.

5) Simplicity: Acts 2:42-47 - I have come to the conclusion that though not mandatory, a Christian should live minimally

6) Nonviolence: I have come to the conclusion that the Christian is to endorse nonviolence yet not pacifism.

7) Feast & Holy days:  Not at all mandatory but a gift that celebrates the Hebrew Testament to shed light on the New.

8) Bible Reading: Not just reading it but living it.

9) Lollardy/Evangelism/Fishing: I don't see it as being an option - Sharing the "Good News" with all.

10) Apologetics: More than just a "defense" it's a way of seeing the world through a biblical lens.

Now let's add a few details to these above 10 points...

10 years apologetics, travel, fighting, degrees, NYC to Off-Grid... Science/Philosophy/Art - our very existence all resonates with this "greatest conceivable story" that is Christianity... It's like trying to describe in "words" the scent of a rose or perfume... Suffice it to say, #1 is not just retelling the Story that "is" God's story and ours; instead it is living it and experiencing it in reality. People have lost this passion and have turned to antidepressants/stimulates, sports/entertainment, politics/wokism, and all kinds of idols but we need to relearn the "Epic" story that is God's story and see our part in it. Again - for whatever reason (I'm still trying to figure that out) God has led me from academia,  Wall Street back to my roots but in some ways I feel that finally I might be seeing more clear than ever even though it's still a bit like looking through a cloudy glass of water. ;o)

Here are just a few short videos related to my 10 points. While I disagree with Dr. Michael Brown on many things and him with me, I do respect and love him as a brother in Christ. Moreover his work teaching Christ to those within Judaism and for calling sin "sin" is very commendable. I use his video clips here because even though he disagrees with me on most of these points, I want you to see that he "mostly" agrees. For example, when I spoke to him...  I like that Dr. Brown disagrees with me (at least in part) on basically all of these points because it allows a differing view *but at the same time he agrees with almost every point I make foundationally. Again - if there is a chance we should do "X" and avoid "Y" then why in the world (if you're Christian) would you even take a chance by "not" doing X and "doing" Y?  Just think it through.

Funny how I rewatched this old series and see so many real-life parallels that would impact us today (similar to Book of Eli). Being born in 1978 I am both young enough to be well versed in the "ways of the world" while also old enough to remember "nuclear attack" drills in our school (in the even that the Soviet Union launched a nuclear attack). ;o) I know, I know: nothing bad like that could ever happen.

Jeremiah speaks of a "return to the Old Paths". While this could mean a lot of things, I do think these 10 points easily could circle around this notion. Again just thinking out-loud.

2) Sabbath: Here Dr. Brown argues several interesting points concerning the Sabbath... Interestingly we agree with much more than we disagree on this topic it would seem. *He also points out that if you want to keep Sabbath then why not keep the Biblical Feasts? Both Dr. Brown and I would agree that none of these are mandatory or required; where we differ is that I think we "should" whereas Dr. Brown would more hesitantly agree.

3) Baptism: Here Dr. Michael Brown recognizes that baptism is necessary though he too is worried about saying: "Christ + anything" in the church's odd concept that obedience is not required because that might somehow be a "work"? But Brown's words are worth pondering: "Rather than asking if I can be saved without baptism, how about just obeying what Scripture says and be baptized?" We know there will not be any negatives to getting baptized but there could be grave consequences for not so why chance it my friends?

Similarly here Dr. Brown provides a good summary of obedience and repentance here. If I said I was born with a high-level of testerone does that give me the right to fornicate or cheat on my wife? Certainly not. I must control my passions just like the person born with a temper must learn to control his or her anger. We must get out of this idea of presentism.

4) Communion: It's somewhat obvious and built into the New Testament and Church History but, alas, needs repeating for most Protestants. Crazy that only the Anglicans and Church of Christ groups seem to understand this within Protestantism? Ignorance is no excuse.

5) Simplicity + Community: Goes without saying, but Acts (specifically Acts 2:42-47) provide a good glimpse as does any of the various groups we've so far discussed. No real "perfect example" as all are trying to figure that piece out (as are we):

Kwai Chang Caine in many ways is more biblically literate on the topic than Shane Claiborne. Thoughts? (While I agree with Shane more than I disagree, he is just as bad as the alt-right in some ways (I have tried to engage in friendly debate but he has shown no interest in interacting thus far. I LOVE his concept of a biblical community life, but he has become more known for being "anti-Trump" than pro-Christ which is just a problematic as the "Trump and God" people that turn my stomach.

7) Feasts & Holy Days: Easter, Passover, and Biblical Feasts? *Brown already commented on some of these in the Sabbath debate?

8) Bible Reading: The Bible is not a story of going to Heaven "playing harps on clouds"; instead it is an Epic story; in the words of Alvin Plantinga: "The greatest conceivable story ever" and it's time for Christ followers to realize this and live it out. (If you want to be on the bleachers then just quit pretending to be Christian)

9) Lollardy: Is it odd when atheist Penn Jillette understands the importance of evangelism more than the Christian?:

10) Apologetics: Here Dr. Brown discusses debate, reasoning and apologetics in a broad sense. He does so in a loving manner and has debated a number of people on a variety of topics, all in the name of reaching them with Christ. Whether it is a Jewish Synagogue or a extreme Liberal Church, Dr. Brown provides a good summary here on why debate is not always a bad but sometimes necessary.

Apologetics (1 Peter 3:15) are more than just "winning an argument":

Honorable mentions could include demonic activity/exorcisms. It's ironic that in our "enlightened" times (see: presentism) that we know better now. Ironically Jesus speaks of exorcism just as much as anything through his ministry and his disciples seem to practice it? I know - as "post-Enlightenment" Christians we know better, though we still keep other things like virgin birth, communion, baptism, etc. Moreover, being someone who has 2 Masters (and just recently decided not to finish a 3rd), has worked at a major microbiology laboratory and written/debated/spoken on such topics quite extensively, I can confirm that if you are a Christian (or lesser claim: If naturalism is false) then such things as the demonic realm is not only plausible but scaringly realistic?

Though I do not agree with everything Prince says, I think he provides a decent breakdown of the topic (again not one of my 10 so I would encourage you to research more on your own; starting with the Bible perhaps (crazy I know). Derek Prince (1915–2003) was born in India of British parents. Educated as a scholar of Greek and Latin at Eton College and Cambridge University, England, he held a Fellowship in Ancient and Modern Philosophy at King’s College. He also studied several modern languages, including Hebrew and Aramaic, at Cambridge University and the Hebrew University in Jerusalem.

A lot could be said in regards to "Kenosis/Theosis" but I will just encourage you to think holistically about the subject and let's talk? Kenosis has been covered (Silence gives us a readily assessable example and again, not one of my 10 but could easily form within all 10:

Last but not least is the Maccabean zeal that led to their revolt. Again, this goes in direct opposition to point #6 but not only are Christians extremely ignorant on this topic (the time between the Old and New Testaments) but also are they almost "neutered" in any concept of living/dying for their faith. Nonetheless it is a good reminder, though the Persecuted Church that dies daily is likely a better example that has been covered on other pages:

Maccabean zeal? Desert Fathers stillness? Are they one in the same though seemingly at odds?

USA vs Rome? You tell me... Still researching...